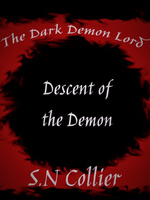 Demon Lord Arnin has reached the apex of his universe, with everyone and everything fearing his very name, however, no one knows of his tragic past.

With his clansmen being brutally slaughtered when he was very young, he was forced to enter the ruthless world alone. Betrayed at every step and finding himself against the world at every angle, his heart turned to stone, not allowing anything to affect him ever again.

Right when he thinks that the world is firmly in his grasp, he learns about the existence of the beings that partook in the Great Demon Massacre of time immemorial. Learning that their power significantly exceeds his own, Demon Lord Arnin finds that the best way to increase his own strength as quickly as possible is by reincarnating into a world that uses a power completely unknown to him and starting over once again so that he may merge his powers in the future.

Will the feared Demon Lord Arnin finally achieve the revenge he yearns for, or will he collapse after his million-year reign, simply becoming a figure of the past?

Check out A Devils Lie, a new novel by yours truly, found on Webnovel.

Support me on Amazon!! TDDL Descent of the Demon: https://www.amazon.com/dp/B07NCMC33K