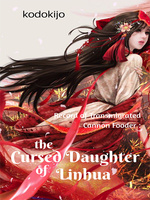 Jing Yi, 26 years old new-recruited sales represenative in her company, had been transported to another world after being sucked into a tornado.

She woke up inside a body of a 10 years old girl - the third young miss of Jiang family, a cursed child and foretold as a bearer of calamity - Jiang Yi.

She had been ostracized by other family members for years.

Her father was cold and indifferent man. She never felt his love.

Her mother died right after she gave birth to her.

Her only elder brother gone missing for years.

She lived in that big mansion but struggling in poverty. Got starving and injured without anybody who cared whether she was dead or alive.

She lost mostly of her past memories, but her desire for survival had been never faded. She used her intelligence and gathered her limited knowledge from modern world to preserve her little life.

"If someone else can do it, why can't I?"
She believed.

Every life is worth to fight for.
...

He is a second young master of a powerful dark cultivation sect. Crippled and disfigured. Lost his father, mother, and elder brother in war years ago, he had been living his life in deep and endless hatred toward the world.

"I will burn and bury everything in this world in endless nightmare and despair."
His oath.

Mountain of bones under his feet.

But he never intended to stop the slaughter. Until every living being above the earth under the heaven was ceased to exist.
...

Both of them met. Couldn't escape from the grasp of fate, bound in marriage arrangement.

She was afraid of him.

He was cruel toward her, made sure that she lived in humiliation and misery.
...

Later she found that beneath a horrible surface, there was a gentle and loving heart.

He found that beneath a weak mortal shll of a young girl, there was an eternal faith.
...

The Ruo River is three thousand li long, one only drinks one ladle worth of water from it.

"Even if this whole world hated and cursed you, you will always be a treasure in my eyes..."

I hope we can enjoy this story together till the last chapter. Please give me your support by rating this story and writing your reviews.