Game of the Devil - Magical Realism

/ Magical Realism / Game of the Devil 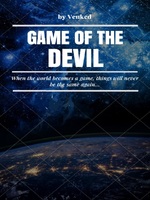 Game of the Devil GOD

Various phenomena accompanied his descent; Light shone down from above the skies and a pleasant melody rung throughout the whole world.

At the same time with his descent, the ground opened up and magma erupted from different parts of the world. Earthquakes with unimaginable magnitude were experienced all around the globe. Buildings were smashed and chaos was everywhere.

"Hahahahaha, what did I tell you, Father. I have already said that humans are ugly creatures that will always betray your love to them. I have won our bet, from now on, I will be the ruler of this world, hahahahaha!!!"

"Sigh...I have nothing to say, Satan. I just hope that you will not let the humans suffer very much. Atleast, do not kill all of them. You can treat this as me asking you for a favor."

"Haha, you do not have to worry, for I will not kill them."

And with that, the light that was shining from above disappeared and the world was enveloped in darkness. A dark, sinister voice was then heard all throughout the world.

And with a sinister laughter that reverberated all around the globe, the voice of the devil disappeared and the game for survival commenced.