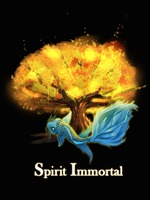 Over a million years ago, the first human contracted with the first Spirit. Ever since then, Spirit use has become commonplace. Humans used Spirits to carry items and start fires. Eventually, even start wars. Thousands upon thousands of years past and one day, one human did the impossible. He transcended his mortality and ascended to the realm above.

In the present day, the Frie Clan was once a great clan of the Himmel empire. However, a devastating battle ten years ago crippled the clan and their numbers dwindled. To make up for their loss, the upper echelons decided to adopt young orphans and nurture them to become a future pillar of the weakened clan. Shin was one of those orphans.

For some reason, QI doesn't allow you guys to see my tags so here they are. Also, there is no Harem in this novel for those of you who are curious.

Chapters are released daily at UTC+8 0100 unless stated otherwise