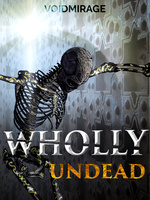 Are we ever wholly dead? Completely dead?

Jack has lived a lonely sad life, and we follow him into death! Follow Jack's journey into death, where he finds that death isn't the end, but just the beginning.

After death, Jack awakes in a new world, very alien from our own, in every way one can imagine. As some things change, others do not; is it human nature that is vile or do all intelligent beings become a slave to their ambitions.

Jack finds himself the ruler of an undead kingdom. Furthermore, he is The Holy Witch King, an undead with Holy powers? What's a bonehead to do?

Join Jack, after his death by microwaved food, as he reincarnates into the body of a ruler of an undead kingdom in a strange environment of the underworld. Follow our, wannabe nihilist and socially awkward, hero as he learns about his world, and tries to play the part of their supreme pontiff and ruler of the Holy Kingdom of Deagoth.

Give it a try, and leave a review.

And here is a map to help understand locations, as they are mentioned in the story.

*******
Releasing chapters on Mondays, Wednesdays, and Fridays. Extra chapters are posted on Tuesdays and Thursdays.

Please consider buying me a coffee, as all coffees donated goes to the steady supply of caffeine in my veins.