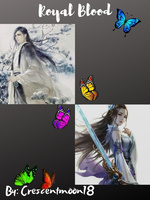 Her mouth finally moved and muttered, "Laoshi Hua..." She waited for a reply or anything even her breathing or movement. She saw nothing. She finally came to her senses and shriek at the top of her lung. "AAAAAAAA!!!"

'Dead? Dead! DEAD!'Her hands covered her face, and tears fell down her face. 'She was dead. Laoshi Hua was dead.' Tears fell were threatening to fall. They finally fall, and wouldn't stop.

***
Jing Wu stood opposite her. He looks at her with cold eyes. He points his sword at her. "Who are you truly?"

She just smirks at him, and her finger traces the sliver mask on her face slowly. She then sighs, "You truly don't remember me?"
***
The War between Gods and Demons has never end. This causes the Humans who are weak in mind and body to suffer greatly. Yet no one has ever paid attention to them. So humans' hearts were created to form their greed, hate, love, sadness, and happiness.

But with each try, the god or goddess was either killed off by the demons or was changed to become a human. Some were killed off by humans would their weak bodies. Some return to heaven (kill by humans), some were dead forever (killed by demons), and others were sent to be demons instead (those that turn to human hearts instead).