/ Sci-fi / Epiphany of the Weak 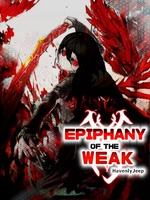 Epiphany of the Weak ETW

The strong rules over the weak. It has been a golden rule since ancient times. And so, weak people were discriminated, treated with injustice.

In this story, we follow Ava, a 10-year-old girl who got caught in the attack of her own settlement by a military force.

Through an incident, Ava realized the power within her gene, Aegis. With her newfound power capable of overwhelming any weapon and armor the army possessed, she paved her own way of finding her parents.


#Story is also published at royalroad.com