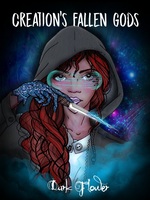 In a future world millions of years ahead, magic and technology coexist normally. What is known as human beings are living in countless planets now. Lots of hybrid races evolved and the relations inside the Imperial Conglomerate are calmly resolving after the ending of the Great Xenophobic War between the greatest racial groups: the Jomons and Brards.
Alésia Latrell, a common Brard had her life completely changed after being forced to become the new guardian of a universal treasure, strong enough to even take her life. Now, beyond take the title and change moving to another planet, she needs to face the pain and the responsibilities of her new powers.
-------------

I'll post more as soon as possible. But I have not too much time to keep posting every day, so the chapters are been translated and edited to be posted all together in one go.

Here are some other things you should know:

1) There is some romance in this novel, but that is not the main focus. It converge elements of magic and scifi, besides some psychological and violent plots.

2) This novel is a translation. Original title: "Deuses Caídos da Criação" (DCC) I'm the author, but I'm translating it to English on my own, to learn from the process. So if you find and errors, feel free to report then to me.

3) In my main language, the novel is already at the 180+ chapters, so I'll try to bring as much as possible to you, so I hope you to enjoy.