/ Romance / I Will Love You For A Thousand Lifetimes 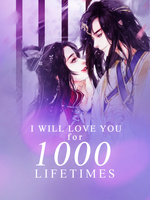 I Will Love You For A Thousand Lifetimes IWLY1000

“I will love you in this lifetime and the next!”

Liu Xing Yu is a struggling actress with no luck in the industry. After offending a hotshot in her entertainment industry, Xing Yu finds herself struggling to land roles to further her career.

Mo Rui Han is THE top actor in China. Not only that, he is the CEO of Feng Yi Corporation. He is cool, calm, and always collected. Rumours say that no one has ever seen him smile.

Everything changes on the set of Scarlet Moon. Liu Xing Yu was just an extra playing a minor role, when Rui Han suddenly declares, “I WANT HER AS THE FEMALE LEAD!”

No one is quite sure why Mo Rui Han seems to be so interested in an unknown actress, and Liu Xing Yu is the most confused out of them all. What she doesn't know is that Mo Rui Han and her are soulmates, and that they have been born and reborn many times.

However, while Liu Xing Yu remains blissfully ignorant each time, Mo Rui Han has been doomed by the fates to remember all his past lives at the age of 16, and he has spent each life looking for her.

This time, he has finally found her after 9 long years, and he is not letting her go.

Thus begins Xing Yu’s acting career, as well as the love story of a thousand lifetimes! Two people, bound together by fate, one lifetime after the next… One always remembers, the other always forgets... But ultimately, the forces will always bring them together.