The girl who wanted to be a hero, but reincarnate as a villain! - Eastern Fantasy

/ Eastern Fantasy / The girl who wanted to be a hero, but reincarnate as a villain! 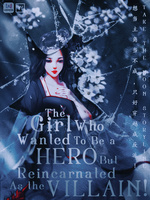 The girl who wanted to be a hero, but reincarnate as a villain! I'm a Villain

Everyone has always dreamed of being someone famous and important, who could mark the story, be an intellectual, a Nobel laureate, a person who Oscar winner, a Grammy winner, an Olympic gold medal winner, of the best in its area of action and of course being the most famous and rich in the middle of the way.

Chun Xiaoli was no different from the dreamy men and women, who with their sweat and effort sought recognition for their hard work.

She had already entered the world of "men", had civil engineering and now took her Masters in Business, with her hard work and sweat she built a company with considerable fame in China, she was nominated as the entrepreneur of the year!

Finally, she was being like those heroines she'd read about in her teens, she had it all, a brilliant career, a loving family, trusted friends, and a man she loved!

She was the hero of her own story!

Everything was perfect in the life of Chun Xiaoli until a knife crossed her chest and took everything!

When Chun Xiaoli awoke, she found herself reincarnated in a novel she read when she was young, "The Emperor pampers his diabolical consort!"

This is a typical Chinese Novel Web of the Xuanhuan genre, with the hero going from pig to eating the tiger until he reaches the culmination of power, and FL is a smart and pampered twenty-first-century woman.

Chun Xiaoli reincarnated as the betrayed bride and hero's cannon fodder! Worst she became a villain just because FL felt offended by the existence of this bride! To make matters worse this cannonball had a horrible end!

She was thrown into a primitive village where she was raped and then made of food!

After her past experience, Chun Xiaoli understands that there is only one way to go: The way of the villain without shame!

Humiliate the hero, play FL in the mud and climb on top of the world!

This is a story where the villains are the winners!

NOTE 1: There will be TWO chapters per week!

NOTE 3: I do not know if I will have enough readers to get this ranking, but I will publish slowly and edit the previous chapters, thanks for following the stories.