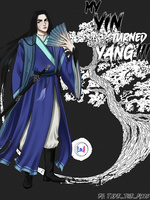 Feng Chan is a powerful, intelligent and beautiful woman from the 21st century, she lives in a futuristic era as a powerful CEO. She is also known as the ice-hearted woman.
When in fact Feng Chan is a woman who is quite romantic in her heart, but as she had a position far above the masses, she had to stay serious, strong and with a distant attitude.

Anyway, she had a little secret. She loved reading novels with strong female characters and gallant men. Yes, in her heart she wanted to have an epic romantic adventure with some kind of hero.

Who never dreamed of having a love (regardless of gender) that defied gods and demons?

Strangely, she didn't like stallions novels, but for some shady reason, she was reading the book "Cruel Times." That counts the journey of Tao Kang the hero of this book, who has to face many financial, educational and death difficulties to get to the top of power.

Of course, like the whole stallion novel, Tao Kang picked flowers everywhere. Beautiful roses from the sects, beautiful lilies of the palaces and beautiful wildflowers on their adventures across the Hua Continent.

What surprised Feng Chan was that the character Tao Kang was not a typical stallion totally straight sexual, but he was BI sexual, he was also attracted to men!

Anyway, after a night of drinking to drown her mages, after all, her cousin was going to marry her ex-fiancé.

Feng Chan ended up transmigrating into the novel Cruel Times!

Not only that, but she transmigrated to the body of young Chu Jiayi who was Tao Kang's first love interest, who showed that the hero liked men too!

A pity that for mysterious reasons and unfounded rumors, Chu Jiayi became a small villain who was killed in a very cruel way, moreover, he had his family destroyed and his younger sister joined the hero's harem!

Feng Chan just wanted to vomit blood when she realizes her current situation!

I'm glad Feng Chan came up with her beloved Karla-03 system for this ancient world, otherwise, she wouldn't know what to do.

Chu Jiayi: Hehehe, now that I have my system and I know about the plot, let's look for a way to have a quiet and peaceful life!

Of course, Feng Chan, now Chu Jiayi, he would have to fix the things the original Chu Jiayi had done.

Then with meticulous work, Chu Jiayi achieved the goodwill of his half-brothers, the absolute obedience of his younger sister and the confidence of the elders of the powerful Chu Family.

It was still eight years before the hero of this world appeared in the town of Chu Jiayi, so he felt he had plenty of time to prepare.

The hero with memories of past life arrived in the town of Chu Jiayi and discovered the hidden secret of his body!

Ehhhh the hero fell in love with me?

Do the sacred beasts want to serve me?

Is the main FL of the harem an ambitious bitch?

Was the traitor to the Chu family is my most precious younger brother?

Is the main city actually full of prejudice and is long overdue?

Hey, author, the plot is wrong!

Take care of the younger brother with even more love!

I love animals, let's have all the sacred beasts as pets!

Let's make a revolution in this ancient city! Let's be rich and fair!

Tao Kang: All right I'm no longer a harem man! *Throw away the flowers*

Tao Kang: All right, so I'll be sent by you!

Chu Jiayi: I'm going to be the husband!

Tao Kang: All right I'm going to be the wife!

Chu Jiayi: So because I'm the one getting this great sword of yours! Ù_Ú

Tao Kang: Do you want me to receive your sword?