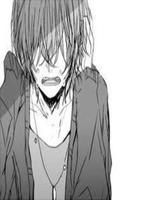 A boy without purpose finds himself Enchanted by music, then he begins his journey to learn music of all sorts to feel the spirit behind it.

then one day he was struck by Lightning and he died near instantly.

"YOU WILL CHANGE EVERYTHING! SEEK GREATNESS!"

What greatness could he acquire? None!
What could he change? Nothing!

He had only started on his path toward music! Despite being only ten he was already a world-renowned Musical Genius! but now that ended.

J could only scream, a cry, a shout of anger, depression, a Love Lost, an empty feeling that could no longer be filled and came out in a form of a great world-shaking scream even in the afterlife the world shook under the density of emotions in this roar of emotional pain and tore at everyone's heart causing them to feel the full amount of endless pain and longing.

Then he fell, Screaming an endless pain endlessly for centuries his Voice tore at all, At everyone in ALL worlds unable to escape the horrible ache that this boy caused inside their heart of hearts,

And the Screaming Stopped, But he wasn't alone because now every GOD and Divine being that had heard his cry, His plea had wanted to see him achieve happiness, And they WOULD, see him Smile once more as he did in the beginning when he first met music.

But ONE more than any other the one being who loved him with his Entirety, with his everything the one who had Felt the boys pain the most Apollo, The god of music, truth, and prophecy, healing, the sun and light, plague, poetry, and He would never EVER leave this boy's side.


[ALRIGHT, GUYS, THIS IS A PASSION WRITTEN NOVEL OF BL AN YAOI ROMANCE STYLE I AM WRITING IT WITH MANY EMOTIONS SO TRY TO OPEN YOURSELVES UP WHEN READING THIS FOR THE COMPLETE EFFECT OF THIS WRITING.]