/ Fantasy Romance / Bambi and the Duke 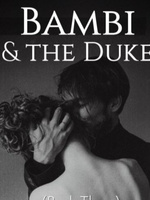 Bambi and the Duke BAD

"What? Never seen bruises before?" Leonard asked the girl.

"It hurts?" she asked him instead softly, seeing the bruises that covered his face.

"A little bit," Vivian remembering what her mother usually did to her, brought her hand up to blow warm air on her full sleeve to place it on the boy's cheek, taking the boy by surprise again.

Leonard swatted her hand away, a hint of pink appearing on his cheeks embarrassed, "W-what are you doing?"

"Mother tells it goes away," the girl held her hand close to her chest.

"That's okay. It will heal in two days," he said moving away from her and taking a seat on the chair where his books were placed, "Odd girl," he muttered pulling a book from the stack before getting lost in it.

Disowned by her own family for their own reasons, she was taken in by a maid at the age of seven to work at the Carmichael's household. The Carmichael's were one of the respectable pureblooded family in Bonelake and like any other household, there were rules. Rules that needed to be followed by the servants and maids.

Like everyone else, she was reminded not to disobey the rules. But before she learns to walk in the shadows like the rest without a whisper, the Duke's young son calls her 'Bambi' and everything breaks loose.