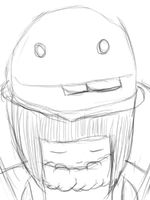 This novel is quite good if you think in the positive way as the storyline is good and all with some reincarnation benefits BUT there is so much stupid f@$&ing **** that messed everything like MC talking with his partner then flashback for a very insignificant reason for a chapter or two . There is also the problem with POV ( don’t get me wrong , I like some of it ) I can’t tell who is talking all the time as everyone the author describes the person with “I” . Thirdly, the story is inconsistent with previous chapter ( unless I’m blind and can’t understand it ) like the part where they were fighting the blood something wolf BOSS in the forest while talking about real life creature in NOIM then the damn flashbacks happen again and by the time the flashbacks ended the story were no longer fighting the wolf in the game but the heroine ? Fighting some other monster or talking with the captain in the city which not related to the storyline in the fighting scene or is the scen after the fight but I’m not sure about that . Anyway I like the plot line and hope the author to fix these minor issues like adding “ William POV “ , “ Yesterday or an hour ago or 20##.3.6 “ , he title of the chapter should change according like side story 1,2,3 or Edizon ‘s POV during the battle and so . Thx
2yr
view 1 replies

K, first, the whole premise of "give everyone free VR" reminds me of what Samuel L. Jackson's character did in Kingsman. Just from that, you already know it can't lead to anything good (in a *good* way -- does that make sense?) That said, I had to make up my own theory on-the-go for why every government in the world would simply agree, out of nowhere, to do this thing: aliens. Yep. This whole thing was actually the start of an alien invasion plot. But hang on, I'm only at the second chap rn, let me read some more... Mortalrich. At first I thought, no, I can't, but then, if you take this name as the first clue that we shouldn't take every detail at face value (i.e., everything's not all as it seems), then yeah, cool, I'm down with it. The first half of the second chapter was confusing. It's still the first person POV, but that felt like a totally different character. I guess I'll find an explanation for this later (I hope). Edit: shoot, she was actually given a name. Alice. Author, there's a way to make third person POV take on the character's personality. If you do rewrites in the future, I suggest just using third person if you're going to keep switching POVs. It breaks immersion too much when we've just gotten used to stepping into the first person's POV only to be yanked into the shoes of another person. I LOVE the interaction between William and Edizon. I like Edizon better, tbh. William went full-on dark from the first few paragraphs, but then, he's nineteen. It is a rather dark age. So... author did end up using the third person POV by chapter 3. This is better, I just wish s/he'd use it uniformly all throughout. Final comments: uniformity with the use of POV, language, etc. (including the capitalization of the chapter titles) would improve this novel immensely. But once you get past the shaky first chapters and get into the meat of the action, which seems to really begin by chapter 5-ish, it is easier to just get lost in the world of the novel. Keep it up, author! :) P.S. Try changing the cover as well. I use Postermywall, but others swear by Canva. Search for clearer free pix on Pixabay and the like.
2yr
view 0 replies

I like the novel story, its beautiful! Do More chapters to read,very interesting, and cool. The character in the novel are ok, like im watching in tv, reading in wattpad and pocketbooks, its relaxing! I will recommend this to my friends 👍
2yr
view 0 replies

I recommend to my family and friends! Nice web novel. The story is very interesting, thumbs up! The character and story is very cool, which really captivated my interest.
2yr
view 0 replies

Nice work the story / novel is very good, amazing! The way it was written can be easily imagined and not boring to read.This is one of a kind based on gaming and the characters are interesting, i recommend to all 😉
2yr
view 0 replies

I would like to commend the novel as very few Filipino writers caught my attention. The plot is intriguing- it adds to the fact that the setting is based in the Philippines. The characters are well-detailed at the same time mysterious leaving the readers hooked, it makes you want to wait for the chapters ahead. Take note of English grammar, too as it is the main language used in the story although there are only minimal blunders observed. Be wary of word contraction the most. :) Keep on writing! I am a fan of yours. I can't wait for the next scenes to be updated!
Reveal Spoiler
2yr
view 0 replies

The story is really good and in fact I think I recommend this to all my friends. Finally I can see the author's creation. Thanks for a wonderful story
2yr
view 0 replies

i'll say truth, well i like it since the setting is the ph, also it's like you were reading an e-book, which iswe filipino love, I mean POV. They have their POV which makes you want to read more, the mysteriousness of the company alsoadded to hook more readers to follow your story!! Love it men!
2yr
view 1 replies

Came here expecting a mediocre novel but it really wasn't what I got. I like the author's writing style so far and which I could give writing quality 10 stars out of five- it's very rare to have good writing quality on QI. I hope to see what the author has to offer next!
2yr
view 1 replies

A hidden gem. Every chapter feels so meaningful. It adds bit by bit to the story in a pleasant way. It kinda feels like watching an episode from a tv series... I felt various emoions coming through me with everything that happened to the mc. The world is well explained and the good thing is I don't have a shred of clue with what's gonna happen! The story is delivered in multiple perspectives just like game of thrones. The characters are freaking adorable and the choices they make are very real and logical. Most of the characters are remarkable. Some of them are adorable, funny, and some of them are ridiculously smart. It really shows the time and effort that the writer invested in developing the characters and laying down the scenes. Overal, it has been a really good read so far. I highly recommend reading this.
2yr
view 0 replies

+ Writing quality: Very few errors and I don't have to read a sentence several times to understand what you want to say. Story: It's interesting to see that everyone can have the game whatever is their status. The company had to spend a fortune xD I like how you took some parts of other chapters and put them from the point of view of other characters. Characters: The characters are well worked and each of them has their own personality. Their relationships are adorable and fun. World: You explain it well and it's easy to understand. And it's interesting to see that the system knows the MC is back. - In the second chapter, we saw the story from the point of view of another character. I was lost at first before I realized it. Maybe you should be careful or give a hint when we change the characters' points of view. Because of the unexpected changes in the characters' points of view, I was lost at certain moments in the story. It would have been interesting to know what had happened to Alice over the past 8 years since you had taken the time to introduce her and make her the crush? friend? of the MC. As far as video games are concerned, we still don't know how the game really works. I hope it will be explained later.
2yr
view 1 replies
Webnovel