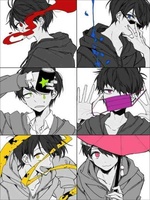 Everything revolved through "ideas" which were "daos" themselves.

"Words" that composed the "ideas" were "laws" themselves.

"Alphabets and numbers" that made up the "words" were "datas" themselves.

Following the protocol of the alphabets, in a particular Tier 1 universe or simpy called as A (graded) Universe; an unremarkable soul was born through the baptism of essences.

Throughout each of his lives, he was always a nameless person. But every time he was drowned by his dark aggrieved despair, a gleam of light would always slip through as a traveler reached him out and gave him a name: Ray.

Following the journey of his savior, he accompanied him as he had slain innumerous magical beasts, immortals, celestials, saints and gods. His new name spread far and wide that inflicted terror whoever heard of him.

However, they both parted ways in the end. Being given a last mission, he let himself be reborn countless times with new memories during each life, as to crack the puzzle how systems were made.

Finally, the day had arrived.

But what if that time he was a NEET?