/ History / Lost in Character: Transmigration Chronicles of a Nameless Heroine 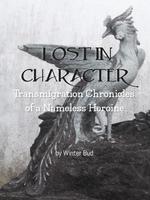 Lost in Character: Transmigration Chronicles of a Nameless Heroine LIC

You were destined to live more than one life,

The one you've been living wasn't even the first, and

It was a destiny you absolutely cannot escape from?

As a top actress, the heroine lived for the pleasure of taking on other people's identities. Her talent had allowed her to truly become her characters. But after the cameras stop rolling, she knew she could always take off the mask of the moment and return to her true self.

And the world as she knew it took a nosedive.

In a country threatened by war, a princess no one can tame is both the hindrance and the key to her homeland's safety.

All she wanted was to take up her sword and fight...

...but everyone else wanted her to take someone else's hand and sacrifice who she really was.

How far can she push herself for all that she holds dear?

This story was inspired by the "Quick Transmigration" genre. I will be spending an entire book/volume on each world/setting, so it really wouldn't be "quick." The basic premise is the same, though. I hope you'll enjoy, and if you want, please tell me what you think through comments, reviews, and *cough* votes. Thank you! :)

UPDATE: I'm an advocate of free will, among other things. Everyone is equal, we are all entitled to our opinions and our likes and dislikes. That said, the views expressed here are not to everyone's taste. People who think the universe came to be for their sake probably won't like it. :)