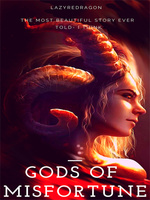 
A shadow rushed over the bushes by the tree silent as a wolf.

Blade glimmering in blue light, a dagger was held at deaths throat startling him awake, what an ironic scene. Who was mad enough to threaten death?

More-so how could he even see him?

"This young master is being rather disrespectful," he stated voice as cold as ice.

"Who are you? State your name and rank." The hooded figure asked in a clipped tone


"Just a very old man watching the world go by." he answered, "I am more concerned that you can see me."

The ageless one smiled.

The mad one scowled the dagger biting harder into the man's throat, this boy meant business,

"Apologies, I am Durion Frey."
His face was hidden but blue eyes shone brightly, just as they had for his first flame.


In the age of Dragons, Faeries, Gods and magic who better to end the world than the Goddess of love, Goddess of rage, God of life and the God of death.

They have chosen their champions and the stage is set and though only one god thinks the Earth is worthy of saving, the other simply wants to be entertained.

The goddesses seek to kill their champion

And the mortals seek to kill themselves in this pitiful war of wars.

The wheel of destiny spins as the story runs on.

whose champion will survive?

Does it even matter?

Death always wins and this world is, after all, doomed.