/ Fantasy / My Second Life is a Heroic Power Fantasy 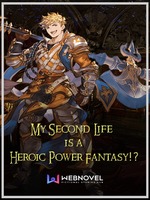 My Second Life is a Heroic Power Fantasy MSLHPF

**AMAZON, THIS IS PROOF THAT I OWN THIS WORK- Jayce**

With these words, Jack Eames, unrepentant slacker, found himself staring down God, and was offered a choice-

An eternal life of never-ending bliss and relaxation, OR the chance to start over as a powerful hero, fighting to defeat monsters, rescue maidens, and save this new world from another player - a villain who has been given the exact same advantages he has. ...And a couple weeks head start.

The ultimate prize? The winner of the contest gets to become God of this new fantasy world, and reshape it however they can possibly imagine! The downside? Whichever one of them loses ceases to exist!

Learning that being a hero takes much more than pressing buttons on a controller, and that a real fantasy world is far more dangerous than the ones in stories he loves.... well, that's something else entirely!