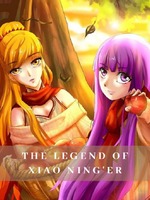 After an epic battle with the Sage Emperor, Xiao Ning'Er's worst nightmare comes to pass when she sees the brutal death of her love, Nie Li, right before her eyes. They had fought bravely but despite her best efforts, she could do nothing as she saw the Sage Emperor's divine spear burst through Nie Li's chest in an explosion of blood.

As the gruesome scene was played out, she felt an intense pain in her chest as her hopes and dreams were crushed in one brief moment. She turned to the Sage Emperor as an uncontrollable fury rose in her heart, channeling all the remaining soul force in her soul realm into the deadly sword in her hand.

Her sword looked like a bolt of lightning, writhing like an enraged python, and her eyes glowed with a blinding white light as she fluttered in the air like a storm goddess. She flew faster than a speeding arrow towards the Sage Emperor, releasing her final attack, not caring if she survived or not.

As her consciousness faded away, she knew she had failed but before she closed her eyes forever, she saw an unusual green entity fly into her chest.

"That's strange", she thought, "it looks a bit like a vine", before all her reasoning disappeared into a blissful nothingness.

Author's Note: Tales of Demons and Gods was the first webnovel that I fell in love with. While the author proceeds at his 'incredible' pace, I've decided to let my mind wander and create a new storyline, building on the same world and concepts.