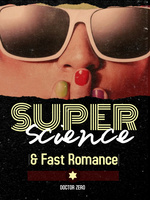 "A super-intelligence is only limited by its ambition. If you could do anything, what would you do?"

Mr. President has inherited a broke, corrupt, government. Unemployment is high, nobody pays taxes, the healthcare system is collapsing, and the government is using systemic blackmail to cover it up. He has a plan to fix it all, he just needs to steal a trillion dollars to get started.

Super Science and Fast Romance is a near future, science fiction, romantic comedy, political psychodrama. It's fun. It teaches how to fix everyday problems with lasers, evil robots, and mass hallucinations. These solutions work really well. Only a couple people die.

Any money made by this book will be spent on drugs and super hot lasers.