Fireheart: The Warrior, the Witch, and the Vampire - Fantasy

/ Fantasy / Fireheart: The Warrior, the Witch, and the Vampire 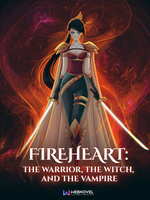 Fireheart: The Warrior, the Witch, and the Vampire FIRE

"I'm tired," said Ragnor all of a sudden. "If you recall, I battled a Karaina today. I'm glad to be alive, and I'm not sure I'm going to be alive tomorrow. So please, if you want to commit treason to go help your friend, go to sleep. Stay in that house and someone will go looking for you before dawn. Pack lightly and have your ostrich ready, because we won't be stopping for a long time," he said.

*****
In a world where humanity battles to survive the constant attacks of the blood drinking Hova, the warrior tribe of women called the Karainas fight back. With their fire magic, they have defended their lands for centuries.
Scarlett is the first person to become a Karaina without having any magic, and she has the the strength, skills and speed to prove her worth.

But when the Karainas aren't enough to stop an impending war with the Hova, she must find other ways to survive in this world of magic, masterful politicians, love, and betrayal. With the aid of a rogue Hovan prince who wants to atone for the mistakes of his race, she learns that the secrets of the past aren't what she's always been taught, and that in order to fight for the future, or any future at all, she will have to fight her way with everything she has.