The Descendents of the Royal Blood - Contemporary Romance

/ Contemporary Romance / The Descendents of the Royal Blood 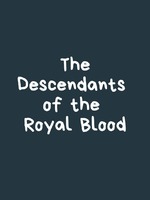 The Descendents of the Royal Blood Rose Thorn

Okay, honestly I write this novel inconsistently because I didn't have a stable storyline and this is my first time writing a long novel. So the updates will be inconsistent. There will be time I can update 3 daily chapters at most and not release any chapters because of my studies constraints but I hope you can understand my difficulties and keep supporting this novel.

So what is this novel about? The main focus will be on how the Descendants of the royal blood (as you can see from the book title lol) get through every obstacle in their life before their status being recognised.

Mia Wilson, the only daughter of Charles and Lucy Wilson couple found out that she was adopted when both of the Wilson couple died. Since then she had been dreaming strange and confusing nightmares in which she suspected relating to her adoption case hence she wanted to seek the truth and look for her biological parents. However, because of her arranged marriage with Damien, the heir to the Scorpion Group and also son of Mayor Williams O'Ryan, she had to delay this plan until finally she was divorced. From thereon, she went to meet Noah O'Sullivan to seek help on this matter however after few round of negotiating the deal with Noah, Mia had to work under him if she wanted to meet her real parents. That was how she ended up being in Maxwell Training School and learnt to be an elite agent.

Noah, on the other hand, was on his mission to avenge his late parents' death but while he helped Mia on finding her real parents, along the way, he found out a shocking secret which revealed his true identity.

Both Mia and Noah were actually the heir and heiress of one of the royal families in West City however their identities were concealed to ensure their safety and after endless twists and turns, finally they returned to where they belong however the struggles had yet to end. A lot of their enemies were lurking secretly with the intention to kill them off. Would they survive till the end?


Psssstttt: Noah and Mia wasn't a couple in this novel. Keep reading the novel if you're curious of who were their destined partners hehehe....

Please do support me by adding up this book into your library. One vote or a comment mean a lot to me. I'll be so happy if you do so :) I'll try my best to keep my readers entertain. Have a great day everyone!