/ others / Hail the Ant King 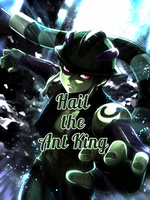 Gabriel Brace was playing with his friends, his life was good, he had family, friends, money, food, and entertainment, from sport to anime and sex.
But, while he was playing, a friend of his had the 'fantastic' idea to put random things in Gabriel's water bottle, which created a colorless poison.
He, without knowing anything about it, drank poison, and died, but unexpectedly, he found himself in a forest near Tokyo, in the Chimera Ant King's Body.
And near him there was a letter, unexpectedly wroten from £&$@#*.
He had 1 year... 1 year before everything started... 1 year to know how to use his new body and nen... And 1 year to know how in God's name he can transform in a Human form.