/ Sci-fi / Careful Not To Break Reality 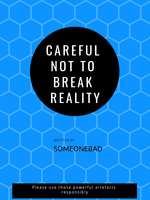 Careful Not To Break Reality CarefulNTBR

Throughout the ages, myths and legends of incredibly powerful weapons were incorperated into the stories of the old for each of the species, and those weapons, each posessing incredible reality altering powers, are known as the Artifacts.

Rydel Daera encountered one of those artifact with the power to warp space itself in one of his expeditions, and from then on his life would be forever altered. There are more of the others like him, but not all of them think of the artifacts in the same way. With power over the fabrics of reality itself concentrated into a single being, what can one do with such power?

With that, the story begins. As Rydel trains to use his artifact with the Bearers of the artifacts, they have also come into contact with a mysterious organization based in the wild regions of space that also has artifact users among them.

Who are they, and why are they here?

This is a story about the twenty beings from the three different species all over the galaxy, and they are bound to leave a mark in galactic history forever.

If you have the power over reality, then be careful not to break it.

For the written first volume, expect a sci-fi space adventure story with a dash of battle shonen.

For the finished second volume, expect a story set in an academy abount one's rise to gain power.

For the on-going third volume, expect an adventure into the various corners of the galaxy and exploring the stories untold in the main arcs by many different artifact users!

For the planned fourth volume, expect an intergalactic political thriller about one's rise to pominence and how his actions will shape the Galaxy from this point onwards!

For the unplanned fifth volume, expect a war!