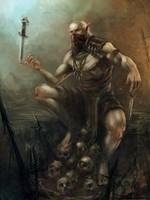 Two thousand years ago, a god brought the Connection as well as new race into the world, the Gobs.

Using the Connection, people could learn magic as well as become superhuman, but the world descended into apocalyptic brutality as the Gobs quickly evolved and formed new factions around the world.

In a cave, far from civilization a Gob is born that is far different from the rest. This odd creature decided to make his mark on the world as well as gain wealth, women, and power after he asked a question that set him apart from the genetically simplistic and savage kin, "Why?"

While the story is original, the cover image belongs to diogocarneiro at DeviantArt.