TRANSMIGRATED: How Many Lifetimes? {ON HOLD} - Romance

/ Romance / TRANSMIGRATED: How Many Lifetimes? {ON HOLD} 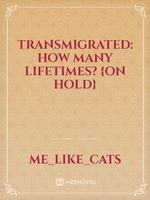 TRANSMIGRATED: How Many Lifetimes? {ON HOLD} HML

In the saddest way possible, betrayal by a loved one.

She was given the opportunity to live again, live the life she wished she had originally.

But there is one set back, will her demons stay quiet?


Kim Nari, a genius of the twenty-first century, had died.
She was stabbed with brute force, by her
cousin, Joseph.

She bled painfully, until glorious death loomed her eyes.

She was aware of her family conspiring against her, she knew she would have an early death, yet she took it. More like, accepted it.

She lost her reasoning for living a long time ago, when she had to dig up dirty streets, scurrying around for food, only to be spat on.

Her only happy memories were carefully cultivated by the enemy, all that she loved was a lie, yet she knew it and continued taking her death as if it were nothing but a gentle stroll.

She lost her mind and she lost her soul, what else did she have to lose? Her dignity? Long gone. Happiness? Which idiot created such a word. Love?...questionable.

Now she jumps from world to world, living for only one thing……him.

She used to cope with meaningless sex, making males writhe with ecstasy underneath her, she felt that this was what life was, nothing but endless cycle of misery.

What did we live for anyway? Eat, sleep, shit, fuck.

Disgusting animals is what we are, what she is, what she knows, all she will ever know.

Yet she continued to live her lie, until the under-ripened age of twenty-six, her much awaited death finally came.

--------------------
Starts of as a fluffy book, but the darker themes will be apparent as more chapters are made.
No matter how many times I try uploading the cover, it doesn't stay.
sad.
Warning:
Sexual content, death, gore. Viewer discretion is advised.
Not for the faint of heart.

if you wish to know the exact time for the updates, the times will be posted on my Instagram.

Occasionally, I post pictures of yummy desserts made by me.