/ Fantasy / The Saga of A Mage Family 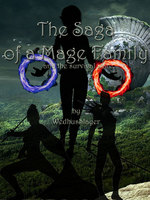 The Saga of A Mage Family Saga Of Mages

Tyas is a product of joint experiments between earth science and Iocyania magical technology. Previously, Tyas was just a monkey lab. Now that the evolution has been completed in a lab scale, Tyas has a physical body that is not much different from the magical girl in the city of Mage, except for her tail, which traces her origins. Because of this, she was allowed to roam in Iocyania, the planetary home of the mage.

Prof. Jack adopted Tyas as his daughter, along with other abandoned children they found. Teaching them mathematics, science, Earth modern pop culture, MMA and even Earth superstition.

While the Magus, Meyrlion Titan appointed Tyas and her foster sibling to be his main students. Teach them all the top-notch mage sciences in Iocyania.

Without Tyas and her family realizing, the era in Iocyania would undergo a drastic change. War on the territorial struggle, hunting of natural resources and magefuel and global warming will be the toughest challenges for them to survive in Iocyania.

Without them knowing it, a large hole had appeared in the Iocyania atmosphere, due to the use of forbidden magic sigils...

And the fire of the challenge was slowly targeting their residence in Mount Luwa, and the cities of the mages: Magetan and Magelang City...