/ Fantasy / Canaan: My World To Live 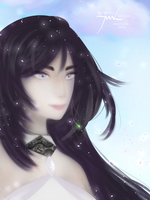 Canaan: My World To Live MWTL

Essairyn had never felt truly alive on Earth. It felt like something was missing ever since she was born, but even after nearly 20 years of mundane living, she could never pinpoint what this or the emptiness in her heart was.

Suddenly, she awakens in a grandiose, primordial forest and encounters both demons and spirits in a parallel world called Sol'h'meyr. She befriends, in particular, a sassy fox-spirit named Akari who just reincarnated after three millennia.

Essairyn is an abnormal human with elemental powers, and Akari is being chased by those of her dark past. Together, they set out on an adventure in a world of magic, danger, mystery, and intrigue.

But this not a game. That simple adventure is actually the modest beginnings in a chain of disruptions that tear even the dimensional fabric of time and space. No one, not even Essairyn, was who she thought she was. And not even the gods can change the destiny of the universes...

The My World To Live (MWTL) series, the alternative short name is Canaan, is comprised of three books symbolically named My World, To Live, and My World To Live. Two years prior, the entire story had been planned and detailed out from start to finish before actual writing. Thus, updates might be slow after a period of time due to real life matters, but the story will never be dropped.

While the genre is largely Fantasy, the book is comprised of many other elements including a School Life (Magic Academy) story portion. MWTL has a lot of scattered symbolism and allusions, hence, the mystery aspect. The science fiction elements progressively become more pronounced, and the slow romance is a late bloomer.

The female lead is strong and independent, and her backstory and identity unravel as drivers of the plot. Expect lots of action/fighting throughout and scattered philosophical and psychological themes arising. It's a human journey to find the essence of one's living and purpose. What kind of world do I wish to live for?

Any feedback is greatly appreciated. I hope to share the journey with you~!

**The book cover is an original artwork by Chryiss please don’t reuse elsewhere. Thank you~**


"For my world to live, yours must die."
- Optimus Prime