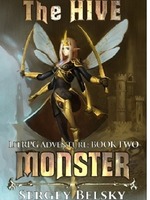 Looking for something new? Here is a new litRPG series.

The main character is a Virtual Game developer, who gets into the game by force. In the game his character is a beetle-monster. He lost his memory and doesn't identify himself to be a monster.

He begins to bump his skills and get different achievements. The shards of memories follow him, but he can't trust them.

The hero tries to know the truth. And the higher his intelligence, the more memories he gets.

The realm, he falls into, is an underground world, which consists of ten levels, which differ with their caves, corridors and monsters. The dungeons are full of aggressive beetles of different types, forms, and sizes. There are a clear hierarchy and division between them. Also, two endless wars are going on-one is between monsters' clans, and the other is between monsters and humans.