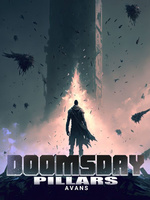 2030 and the world has come to an end.. The human race has been fighting for survival for 11 consecutive years. When the plague started it, it brought death upon 80% of the population. Soon after, the death toll kept rising and more than half of the survivors had died.
When the survivors thought there was no more hope. They came. 1008 pillars dropped from the sky and spread all around the world in more than 100 countries. The pillars became defensive bases to all of the survivors left. But in the end.. Thr human race still lost.
This is a story of Alex, given a second chance to start anew, one month before it all started. This time it will be different for his family, friend, and the human race.

The Novel was created for a writing competition theme kingdom building, so there will be many builds up character and places, please be patient as the Doomsday will not come until the second volume.

Also English is my second language, so beware of grammar mistake, etc. just got help from editor so will get better in the future.

What will readers be expecting from this novel:
*Realistic world background.
*Real historical quotes
*Sci-fi as close to real-world science
*Slice of Life

the tag will be
#kingdom building
#apocalypse
#realworld
#reincarnation