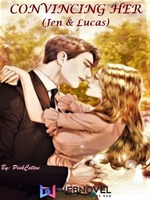 Convincing her (Jen and Lucas) CHJL

Jen is an independent businesswoman who sacrificed her love life to save her family that had gone through a bankruptcy.

In the process, she lost her father, had a falling out with her mother and also broke up with her boyfriend.

After the sequence of events, she moved away from her city to study without letting anyone know of her whereabouts. There she met a younger and richer man that was very persistent on making her, his.

Following their journey on how their relationship develops unconventionally and the things they will go through and experience as they learn more about each other.

"What is it?" She asked with a raised eyebrow.

"Let's go home," Lucas said as he got up from his seat and put on his suit jacket.

"You're done?" she asked as she too got up from the sofa, she stretched her body as she was sitting in one position for too long. Lucas walked towards her and hugged her from behind.

"Mmh, let's go home," Lucas said next to her ear making goosebumps rise on her skin.
*
"Home?" Jen repeated as she leaned against his chest.


A/N: If you aren't 18 and above, try not to read, this is as much persuasion as I can give, I know people will read anyway.

PS: Feel free to join the discord server for Convincing Her to connect with other readers and the author at https://discord.gg/Auyvas5