/ Romance / Lightning Descends by Her Will 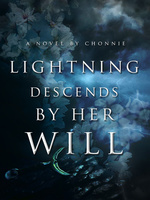 Lightning Descends by Her Will LDBHW

Before the elders, Xie Ying Yue held the testing crystal and watched it shatter in her palm.

A genius, a monster, a waste.

The glory of her potential vanished in the instant she tried to cultivate. Her family watched, horrified, as their precious young one bled black blood while crying out in agony.

From then on, no matter what devastating pain Ying Yue endured to cultivate, one thing remained unchanged.

Her power had never risen.

So when faced with opportunity to defy the heavens, she takes it.


She narrowed her phoenix eyes at the handsome man, his peach blossoms irises twinkling in mirth. The promises that he drawled were impossible to turn down, especially when the annihilation of her family could occur at any possible time.

"Such sweet words claim to move mountains and uproot kingdoms. Why offer it to me?"

His lips broke out into a smirk, almost smile. "You have something that is important to me. As long as you give it, I will accompany you and be at your disposal until you can cultivate."

Ying Yue frowned, "What do you want then?"

The expression on his face grew even more mischievous.

This man was insufferable and perverted, however there were things greater than herself that she needed to worry about. No matter which way she looked at it, she would be getting the better end of the bargain.


Without further deliberation, her lips devoured his.

disclaimer: all the pictures used in the making of the cover were all free for commercial use.