/ Romance / Peerless Doctor: The Rise of a Phoenix 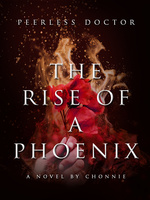 Peerless Doctor: The Rise of a Phoenix PD

Before Yun Da Xia lost consciousness, her last coherent thoughts were of avenging her fallen master.

When she wakes, she has been stripped of the world she once knew and the power that allowed her to soar high. Thrust into court conspiracies, petty schemes, and tyrannical sects; she must find a way to survive.

Ridiculed and relegated to fodder by many; Yun Da Xia can only raise a brow when they finally regret and make desperate attempts to seduce her to their sides.

The fun of leading them by their tails is a way to pass the time before she collects the blood debt she is owed.

A wicked smile that could enchant both men and women beamed at her.

She felt her face flush. It was not from a young maiden's endearing infatuation, rather, it was from the urge to strangle a man in cold blood.

Dark eyes twinkled in delight, "Impossible and nonsensical? Yun Da Xia, I will prove you wrong. You are already the woman in my heart, so I will work hard for you to see me as the man in yours. Furthermore,"

He booped her nose, "You are the only one I want as the mother of my children. I want a lot, future wife, so I'll have to trouble you."

°°
AN EASTERN FANTASY WITH A ROMANTIC SUBPLOT.