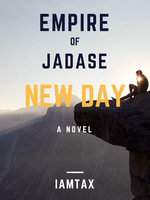 Sadly, war is inevitable in Bizir Galaxy. Nobody wants to see millions upon millions of souls, friends, and families dying for the sake no one knows what. However, piles upon piles of rotting bodies, mountains of skeletons, oceans of blood, screams of agony drifting in the boundless space, tears from mothers, fathers, sisters, brothers, sons, daughters, and friends filled the bottomless pit, greed for power and domination, and also hopeless love made the Bizir Galaxy a paradise of those scenes.

Why hopeless love became the reason of massacre and slaughter? Simple, the First Prince of a great nation, adored by everyone lost his woman because of a scheme made by his own brother, the Second Prince. Thus, to save their relationship, he must choose, whether, to kill the innocent young man who will destroy the country he loved so much, or spare him because he is the hope he was looking for to rescue the relationship he had lost.

Read this novel if you want to know what the First Prince chose. Follow the story of the masked man and uncover the truth behind his mask. What brought him here on our planet? No one will know if this novel didn't go to the top!

----
Everyone please forgive me for making a new book for EOJ: N-DAY because I want the novel to start its new journey after being rewritten and edited. I also want to see new reviews after 8 months. God Bless Us All!