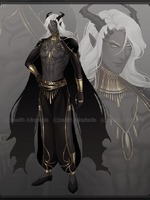 Dr. Frederick Alfheim, was your average lab Scientist. There was honestly nothing spectacular about him. He followed the same routine every day. Wake up, hygiene, leave for work, lunch, and then back home. Every once in a while, Frederick would find himself watching anime, reading a manga or some sort of web novel. That is until the Demons attacked his world. A decade long war ensued and brought humanity to the brink of extinction.

When the sun was setting on humanity, that average joe doctor worked his ass off in an underground bunker for the military to create something, anything, that could turn the tides of war in humanity's favor. Dr. Fredrick Alfheim accomplished this feat during his death. His parents, family, lovers, and friends. Had all perished in the war against the demons. His serum was created to protect the reminisce of humanity from experiencing the same.

Sometime after his death, that serum was found along with his body and notes. Recreated and distributed. Humanity eventually repelled the demonic horde and won the war. Years after his death and the people of his world were long gone. Fredrick was the last being going through the cycle of reincarnation. However, this time was different. Frederick was different. Learning the truth behind his existence and that his loved ones were created to be nothing more than a stepping stone to be toyed with. Fredrick made a decision that would send him on the journey of a lifetime. All in the name of revenge, to slay the Divine Emperor that created him and toyed with his life.

Travelling through the Verses, Frederick will battle his way to the summit of every lifetime and ascend at any cost until he makes it to the True Martial World, to rip the heart from the chest of his creator. He will lose himself. Find himself. Love, mourn, kill, heal, and so much more as he navigates his way to the pinnacle of existence.

In the End, after baring so many titles, answering to different names, experiencing a multitude of love and pain, and the climb to the top that is often accompanied by callousness and savagery. Will he still seek vengeance? Will he become better or worse than the creator, he seeks to destroy? Or will Fredrick be the one to find his chest void of heart and his body short of a head?

Find out in the Journey to the True Martial World.


Starting with the Naruto/Avatar world. -Foundation