/ Fantasy / I Reincarnated As A Stick 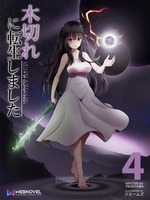 I Reincarnated As A Stick IRAAS

(CURRENTLY BEING REWRITTEN)
Please refer to latest chapter as to whether or not this novel is on hiatus. Also, have this new synopsis.
---------

Wealth, glory, honor, and fame. All of these were owned by one man. Known as the greatest God-level Infinite Evolution player of all time, Aurus had just won his fourth championship with his team...

Only to die in a twist of fate along with his teammates.

Fortunately, the heavens did not abandon him, with a goddess taking pity on him as she gave him a second life to live...as if he were playing Infinite Evolution. According to her, his teammates also had this kind of second life. In other words, Infinite Evolution is now a literal part of their lives?

Either way, let us delve into a journey of hardships, chivalry, companionship, and...

Join me on Discord: https://discord.gg/mB6dUvy