/ Contemporary Romance / It Had to Be You 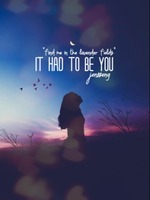 It Had to Be You IHTBY

Ahn KyungHee wanted nothing more than to escape from her despairing, stigmatizing past as a druggie’s daughter. However, fate had other things in store. Just when she thought she was about to lose all hope, a special person from her past reappeared and gave her a whole new meaning of perseverance.

Despite the thirteen year wait, she once again found her first love; only now he was no longer the teenager brimming with righteous determination she once knew. Now, he was a prominent member of the Yakuza family—a man to be feared and revered, but a man who would do anything to give her the protection she never had, regardless of right or wrong. And in her heart, he would forever be the boy who befriended and held her hand while everyone else ostracized her. Then there was the hotheaded detective who was the bane of her existence, only to realize that she meant more to him than he could ever mean to her. To make matters worse, she could only choose one side: Police or Yakuza?

Light and dark didn’t mix. Just like tigers and dragons could not co-exist.

Disclaimer: This is a work of fiction. Names, characters, places, settings and events are products of the author's imagination or used in a fictitious manner. Resemblances to actual persons or events are purely coincidental.

Caution: Contains mature themes, violence and profane language. Read at your own risk.