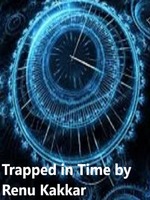 What would happen if you got stuck in Time?

Zia has completed her Ph.D. in Botany and has applied for the post of lecturer/ Professor. She joins a High school as a temporary teacher and is entrusted with the task of leading a group of students on a trekking /camping expedition.

On the way they meet a guy who seems to be a trouble maker but later, he proves to be a pillar of strength. Early morning their camp is attacked and they flee taking a different route. But they are lost.

They enter a world where people are living, in hiding, for over 250 years. Their technology is much advanced as compared to ours. Their world was initially a Utopia but now it is changing due to an oppressive ruler.

They are trapped in the time of this hidden world and want to help the people there fight against the oppressive ruler and his cronies. The oppressive ruler wants to make a number of Time Machines by using the brains of the scientists who had died in harness at the site of the experiments.

They all decide to help the good citizens of the lost world. The huge brains are destroyed and the Orbs of the scientists escape to help the rest in their mission.

In the process, the crystals that are used in the hypnotizing guns are almost finished and to get more they split up to go to the 'Magical World' through a curtain which is a portal. The Magical World is a flat man made Earth-like satellite, which was made as a joke to taunt the scientists 7000 years ago, and which is still operational. Here they meet the inhabitants. They are fascinated with the advancement of science especially the talking chips and the flying cars.They see a completely different world where animals, plants, rocks, water etc can talk. Before you touch anything you need to seek permission.

They also meet the Aliens called the 'Crocodile Race' who have come to the Magical World (the flat satellite) to get supplies. They see spaceships being guided to land by the scientists of the Magical World.

At present they are narrating to the Aliens, what they have undergone till date.