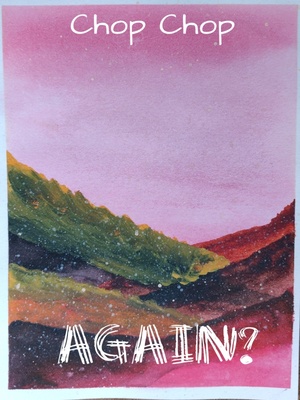 It was on the day of first snow, when I first saw her. I still remember that day so vividly. Why first snow? Well, that's because they celebrate this day every year in Korea when it snows for the first time. I would atleast like to believe that they do.

I'm not from Korea. My father was there on a business trip and my mother couldn't resist a visit to the shopping paradise while she had the chance. I'm in the last year of my schooling. These are basically the preparatory holidays for approaching examinations. So, there I was, roaming around in the streets of Seoul releasing exam stress.

Well, not in literal sense ofcourse! We were on a private tour of the city which is supposed to take us around the famous places of historical values. The last one in the list of places to visit was Namsan Tower.

'Kim Bo Ra' screamed our tour guide to which a girl my age turned towards us. She waved as she walked closer and once she reached us, she gave a proper bow followed by her introduction.

'Bo-Ra(ya) help me showing our guests around the Tower. I'll be back by the time tour ends, okay?' our tour guide was having conversation with her daughter.

She was the daughter of the instructor, who was supposed to help us around the Namsan Tower. The instructor was so delighted while talking about her daughter the entire day that I almost felt as if I'm meeting an old friend.

I can still picture her straight black hair wavering with the gust of wind. Her voice was as sweet as choco chip pancakes.

I have been to various schools due to my father's constant work related transfers and seen a fair share of pretty girls but none compared to her.

She's still in high school. Due to Korean education system being different than education system of my country, she has to complete one more year to graduate high school. We navigated pretty easily with her guidance. Her mother had to take a break and go home for cooking and taking care of her younger siblings she told us later during the tour.

Bo Ra was fluent in English and we had pretty decent conversations. My mother was enchanted by her personality.

There was something about her which was welcoming enough for me to open up to her. I shared a lot of my personal details with her along with funny school scenarios and stories. While my mother was either clicking pictures or briefing my father about our tour via text messages.

I was convinced that I was in love with her and whatever happened before I met her was just infatuation towards other girls. For some reason my heart was beating rapidly as if it might explode and speak out for himself.

We were supposed to leave for our home country in the evening of the following day. I couldn't help but pass her a chit with my number and E-mail address on it.

I'm a bit forward I know but it was the way she told me the significance of first snow while it snowed for the first time that year which got me smitten by her charms.

What a sight it was! Oh, I still can't bring myself for not being mesmerized by the mere thought of it. I do get goosebumps whenever I recalled that moment.

After I passed her the piece of paper on which I wrote my contact details, she said she'll make sure to share it with her mother. I was glad upon hearing her cheerful voice acknowledging my move.

I came back to my country and gave my exams, which by the way went pretty smooth. I was supposed to apply to colleges for my higher studies. I was initially upset when my parents did not let me apply for a college in Korea itself. I used to wait for her to contact me. Two months passed by while waiting for her reply. I usually don't bother with my email inbox and gave up hope to hear from her.

After another two months, I finally checked my email inbox again.

Only after I received our tour pictures via email did I realise what she meant by sharing the details with her mother.

Well, that was the end of my supposedly unrequited first love.

I was in love with the idea of falling in love with a perfect backdrop. Bo-Ra? Well, we're now friends on social media account! After a lot of struggle, by using her mother's email address as base, I searched for her and finally found her.

Why am I still hung up on it? Well, I would very much like to recreate the scenario with somebody who will love me back. Is it a bit too weird for a guy like me to have bucket list of couple goals?

Nowadays, it's a thing in the Korean Dramas as well when the protagonist goes to Namsan Tower to confess their love or probably spend the day of the first snow together in order to symbolise their feelings of true love.

I think today I finally found the one with whom I would like to visit South Korea.

What's your idea of a perfect proposal?