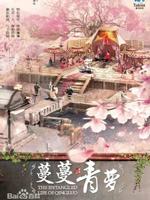 This is a translated novel originally written by the great writer, Zhuang Zhuang. Many of her works were published successfully into the drama as well.

Transmigrated Li Qing Luo, an eight-year-old girl, the third daughter to Ning Guo's Prime Minister Li and his seventh wife. Born to a mother of lower social status, she was treated unfairly and assumed to be of lower intellect, however, she surprised the family when she recited a famous Tang dynasty poem. Knowing she has the aptitude to learn, she hid her ability so as to avoid being married off to a prince or court official like her sisters.

Six years later, A’Luo left the estate for the first time to participate at a flower viewing banquet, where the most elite Five Eligible Bachelors of Feng Cheng was also said to be in attendance. The men included Crown Prince Liu Jian, Fourth Prince Liu Fei, the young An Qing Wang Liu Jue, the son of Prime Minister Gu Gu Tian Xiang, and the top scorer of the Imperial Examinations Cheng Si Yue.

In the midst of the banquet, A' Luo sneaked off and almost met an accident at the river, only to be saved by a young and handsome man. A' Luo too shocked at the sudden incident, accused her saviour of being a pervert, to which he only laughed, and promised to find her in the future.