/ Fantasy / Reborn as a Indominus-Rex 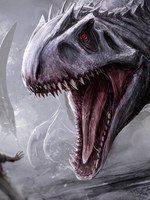 Reborn as a Indominus-Rex Satou

[ Read this first, before you read this Novel. ]

Satou was an ordinary man he had a full-time job as a chef in a Famous Restaurant on Japan, he had a hobby of fishing, cleaning his own house, cooking delicious dishes, donating money to charity, watching/Reading Anime/Manga, playing Games, and Collecting figurines of Dinosaur.

He had a happy life and hope it continues.

Until one night on his house, he saw a masked man putting a lot of money into his bag, and the moment the Masked man saw him, he was about to say something until the Masked man took out his Gun from his waist and shot him from the head, giving him an instant death before he could speak a word.

On the Void, Satou was floating on the void for a few days

Satou knew his was already dead and accepted it, when suddenly his soul was pulled into an unknown place and on the moment he opened his eyes, he was not a human. But, instead he was in Dinosaur's body and this Dinosaur was the Indominus-Rex.

Hey Guys, A few of you knew me that I had dropped a lot of novels of mine. But, just so you know I was only writing for fun and previously busy with school.

And now I'm totally free, not totally since my parent would make me to come with them sometimes.

So, I'm warning you that I am only writing for fun and can easily drop this new novel of mine, since I am also reading a lot of novels and cleaning our house when needed.

That's all! Thank you for your stay!

Leave a review if you enjoy!