Daughters of the Elite - Contemporary Romance

/ Contemporary Romance / Daughters of the Elite 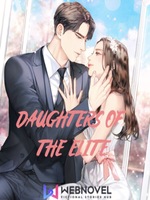 Daughters of the Elite DOTE

What happens if you fall in love with someone you can't have because it's forbidden? [COMPLETED]

Eleven years ago, Qian Meigui lost both her parents due to unforeseeable circumstances. Song Rui—her father's childhood friend—adopted Qian Meigui as a new member of the Song family, blending her in with his other four legitimate children.

Qian Meigui knew little of the Song family—only to find out they were the wealthy and elite family of upper-class Shanghai, China. Years later, Qian Meigui continues to embark the turmoil’s of the rich, while finding clues that would provide her to find closure for her parent’s deaths, as well as coping with her blooming feelings for someone she's not supposed to be in love with—the eldest son, Song Sheng. Why? Because she now goes by the name of Song Mei.

Song Ren is a confident and sharped-tongued woman who values her work and family dearly, willing to do anything for both of them. But she learns to be softer, and less reserved and would do anything to conquer anything thrown at her. When Song Ren is arranged to marry a man she despises, she accepts the conditions of being platonic. But afterwards, Song Ren realizes that her fiancé is someone very similar to her, stirring up the feelings she may already have for him.

Qian Meigui is initially a timid girl who learns how to be confident and defiant. She is in love with her adoptive brother, who, in return, conceals his feelings for her, afraid that if they caved in, the consequences would be devastating. Their feelings and desire flourish as the development goes on. They try not to act on their impulsive urges, but they can't help it if they're in love.

Art is not mine!! Credits to the artist! Will take down at request!