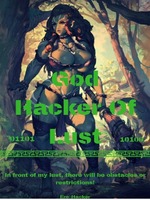 In the beginning, there was nothing!

It was just darkness!

Until the explosion came!

And from her, from "Nothing", the "Dust" was born!

This "Powder" was named "Powder of Creation"!

The Powder of Creation, was dividing in small or large quantities, and spread to the "Nothing", and over the years, took shape!

In time, the Powder of Creation became almost non-existent, even if the powerful sought it, it was impossible to find it in the vastness that was the "Nothingness"!

So, with no one being able to find the Powder of Creation, even after Billions of Years, it was given as extinct!

The Gods were accommodated, and the same for the Devils, who sat on their thrones, reigning as the supreme beings!

Around this tiny grain of dust was an old, mature aura!

And suddenly, in the midst of "Nothing," the forgotten Souls, of the infinite worlds, wandered aimlessly.

Until one accidentally touched the tiny grain of dust, and then they disappeared!

They say that to activate the Powder of Creation, a Desire is needed, but how to make the Desire, it is not known ...