/ Romance / My reflection in your eyes 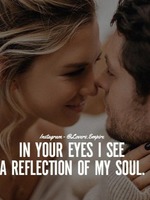 My reflection in your eyes

Du Ru Ran became an orphan at the age of 5 years old after a deliberate car accident. She was then taken in by her uncle. Life was truly tragic but being a smart girl, she managed to turn the tides around. She plans to avenge the death of her parents and her little brother who she did not get to meet in this lifetime. At that time, thank her lucky or unlucky star, she met a pair of mother and son, who gave her some warmth in her moment of total darkness.

Years later, when they meet again, he stuck to her like a fly she could not get rid off. He kept insisting she took advantage of him when they were young and insisted that she take full responsibility for him.

20 years ago:
"Little girl, you really need to take responsibility on this young master when we are older. I am never going to let you go." He whispered into her ears. Due to his illness, he somehow grew up a little mature than peers his age. Hence, it wasn't a normal for him to be thinking about his future at such young age. In fact, since he was three years old, he had been groomed to be a fine young man in order to prepare him as he is the next heir of his prestigious family. He fell asleep with a smile on his face.

At the present:
She thought a dumb cupid made a mistake by accidentally release an arrow and the arrow went straight to a 7 year old boy and now, 20 years later, he is delusional.

"Why can't you leave me alone? I really have no time, no room for another person. I am pretty occupied with getting my revenge. Go and fly away," she said while making the hand gestures of shooing a pesky fly away.

"You really don't need to work hard on my behalf, I am touched that you worry about my well being and feeling. As long as I get to see you, that is all I require. You really don't have to do anything."

Ru Ran felt her head is going to explode, shameless, when did I, how on earth did he manage to lift himself so high that even direct language don't get to his thick skull? Fine, if you don't want to leave, I will walk away.

True to her thoughts she walked away huffing and puffing, fuming at the fly she can't get off.

"Seriously, what do you see in me?" she asked impatiently.

Instead of answering her immediately, he spun he around to face him, pushed her to lean against a nearby wall, locked her body with his legs and arm in order to stop her from escaping. His facial expression turn serious, gone the silly demeanor he had put up earlier.

Her heartbeat increased and her palms started to sweat. She stuttered, "What.. What.. Just what do you plan to do?"

"I am going to answer your question. Look me in the eyes. I see a beautiful lady, a stubborn one, cold exterior but inside she is kind and afraid to get hurt. She gave me a kiss 20 years ago and gave me the strength to live and from that day onwards, I have given my heart to her."

A story about love and revenge. (I hope so)

Updates: 1 chapter / day occasionally can go up to 2 chapters a day depending on my creative thoughts as well the time that is available for me to write

P/s: cover is not my own work.