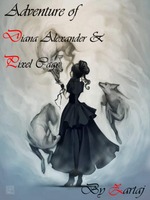 Imagine a person who is as smart as Jack Sparrow, As witty as Deadpool and as fearless as Harley Quinn...

Now imagine this person discovers a hidden portal to a realm of a parallel universe. A universe where there were other species as well along with humans, such as cat people (Nekojin), Centaur, elves, dragons, Dwarf, jins, etc.

Diana Alexander was one such person, only negative point was that she was a nerd all her life. She creates an ultimate AI bot and names it Pixel Cage. She was made to help Diana with her research.

One Day while Cleaning the Attic they come across a device made by her father along with his notes. Upon reading these note Diana realises about the parallel universe and her father's adventures. Her Wanderlust takes over and she decides to see everything for herself.

But a tragedy awaits her there. As soon as she enters this world, she finds herself midst a murder, and she is considered to have committed the crime.

Now it's up to her and Pixel along with James Collins, a very handsome police officer, to prove her innocence.

Will they ever be able to catch the actual criminal?

What else lies in store for her in this world?