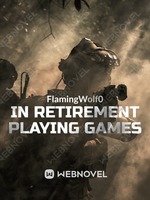 Planet Earth, the year 2040, wars and national disputes are now solved through intense competitive games. To the point where countries are creating and funding teams specifically for the purpose of winning matches.
However, with this new way of battles, soldiers and special forces were no longer needed. The amount of money going into the military's defences has been reduced by 95%.

Due to these changes, once his contract was up and his age reaching that of retirement; Jose was kicked from his special force. However, time is rather cruel to those who fight on the always active battlefield.
His wife died 4 years ago, while his children have all grown up and have children of their own.
Jose waits in his house, sitting on the couch, watching the news or sport as the neverending time continues to flow. His boredom continues to grow larger and larger as his body gets weaker and weaker.

That is, until he hears about the game "Second World", one which his arrogant and disrespectful son in law plays.

That day, Jose decided to dominate the game on the new server. Rise to prominence with old comrades and crush his son in law beneath his feet.

Follow his journey through the expansive game, fighting alongside old comrades and gaining new friends along the way.

One chapter will be uploaded daily. 7 chapters a week. I have no plans to increase the number unless this gains a lot of attraction.
I'm currently a high school student in his final years. I'm doing this for enjoyment, and only once I begin to earn from it will I focus on it.