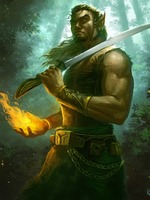 No one knows where the universe came from or when it will end, but one thing is for certain, it WILL end. So, how would you react if you knew that it would end within your lifetime? What if you found a way to stop it? How far would you go to do so?

The story starts with a young wood elf named, Gaelin Reynan, who’s life is changed completely within the span of one day. He is just one of the untold millions unknowingly caught in the middle of a desperate battle between advanced alien civilizations fighting for survival. Join Gaelin as he raises entire civilizations from the Stone Age all the way to the stars. To do so, he must tread on ground where none dare to follow, and do that which has never been done before.

This is a world where thought’s have power, beliefs become reality, and the fate of all creation is tied to magic.

You can expect a 1000+ word chapter almost every day. If I slack off feel free to yell at me.

This is my first novel, so if you notice my writing style changes then it is because my writing is hopefully improving.

This novel contains explicit language, violence, and sexual content. This novel is intended for a mature audience (18+).

I do not own the cover art.