/ Romance / Kiss Me or Kill Me 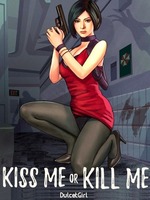 Kiss Me or Kill Me KMOKM

[WARNING: THIS NOVEL HAS MATURE CONTENT. IF YOU ARE NOT COMFORTABLE WITH INTIMATE SCENES, THEN KINDLY SKIP THOSE PARTS !!!]

"I know, she will not hesitate to kill me. She will not think twice before pulling that trigger. But still ..."

'Nothing turns to hate so bitter as what once was love.'

If you think this is a conventional Love Story, think again! This is a love story of two people who are thirsty for each other's blood.

There was only one round of bullet left in her gun. He knew that because he had been counting. He raised his hand and asked his gunmen to lower their weapons and then came out into the open.

Dropping his gun on the floor, he said, "I am not going to shoot at you, Caroline. My men will also leave the premises along with the arsenal."

Hearing his words, and sound of the gun being dropped, Caroline took a quick glance and then came out from hiding and saw him standing exactly opposite to her, a couple of feet away. He stood there all unarmed, his hands raised in the air, gazing deep into her eyes.

She had one bullet left and she could have hit him, point-blank. That was all that she wanted. That was why she was here. But somehow after seeing him, she just couldn't pull the trigger. With nothing but tears in her eyes, she pointed her gun at him and yelled,

Without batting an eyelid, he slowly knelt down.
"I will not. Today you either you kiss me, or you kill me."

He was either going to prevail or perish. His fate lied in her hands.
Her arch-enemy, her nemesis was there, kneeling all defenseless in front of her, yet the only thing that she was feeling right now was nothing but pain.

An FBI profiler and one of the brightest in the batch, Caroline Forbes was not one of those girls who adjusted being the second-best at anything.

But he turned her world upside down, the moment he entered into her life. He was Maverik Hunt, the man whose one look rendered her breathless.

Why all of a sudden a girl, who had a stable boyfriend, a stable life, became all unstable in one single day because of this man?

Why did she dedicate five years of her life just to track him down to kill him?

What made her thirsty for the blood of a man, who once quenched the thirst of her body?

What brought tears to her eyes today?
Why did she remember those days, spun with the threads of love, with the man who was kneeling in front of her?

Do you want to know the answers?

Then, explore the world of Caroline as she walks down a path between the law of the land and the underworld of crime.