/ Fantasy / An Untold Story: The Wanderer 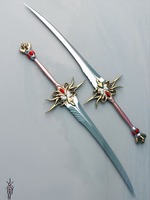 An Untold Story: The Wanderer USTW

My name is lost in space and forgotten in time, I walk among the stars and among the Humans. I'm armed to deal with the smallest man and the biggest empire all at once.

My people existed in a parallel universe to the one I'm trapped in now, there were Vampires, Werewolves and Demons that walked the Earth.

My group hunted them to near extinction however they got the final laugh, they ran to this universe but before they did they tricked what was left of my order into holding a meeting where they were all slaughtered.

I gained the powers of my fallen brothers, I chased the fleeing monster into this universe and my reward for this? Knowing that I was the reason I'm the only one left.

I'm known as a Warrior, a Healer, Killer, Savoir, Devil, God and so much more. However, I'm a simple wanderer, that's all....