/ Fantasy / He wanted a normal life, but ended up as a hero 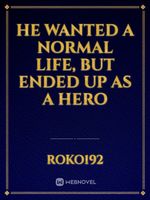 He wanted a normal life, but ended up as a hero

Two worlds were created which coexisted in harmony for a long time. However, when the creator of the worlds noted unrest between the peoples of the worlds, he created a third world, populated by seven gods to create peace. Through disasters, beyond our imagination, the gods purified the worlds. But no matter how often they cleaned the worlds, peace never lasted long.

The creator saw enough and made a decision. He left the one world to itself and he created with his last remaining strength an enemy. This enemy, known as Azazel, led an army of demons and was so powerful that the gods of the seven kingdoms selected heroes to fight against him. The kingdoms were reunited.

At some point, there was such a huge war whose extent no one had foreseen. The consequences of the war were enormous. The kingdoms were destroyed, the heroes disappeared with the gods and Azazel was banished. The war about the remaining resources began.

Nearly 3,000 years after the war, a new major threat loomed. At that time, there was a teenager named Fushida Kuro, who will play a big role in the future. He just wanted to enjoy his simple life as an Otaku and was unaware of his fate. The story began when he came home from school one day and found his family dead in his house. Without realizing it, he suddenly found himself in another world. But why did this world seem so familiar to him?

*English is not my native language, so I ask for your understanding when grammatical errors occur.